We slid this announcement into the post about Read an eBook Week, which finished yesterday.

In case you didn't notice - we have a new edition of the Viridian System Sampler out. 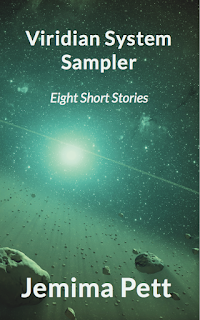 The 2017 edition contains three stories previously only on Jemima's blog, and all the stories are now in the style of the series (although the first is still in Zito's own voice).

Each comes with an explanation of how the story came about - most are in response to an online flash fiction prompt. These short stories sometimes have twists and narrow escapes that might not be sustainable in the series. Zito, who runs a bar and an escort agency on the primary planet, Pleasant Valley, features large in these tasters. The new ones include back story, and first appearances of characters who became important to the series.
The story titles in the second (2017) edition are:

This sampler may continue to be revised to include different stories from time to time, although we wouldn't expect to do so now until 2019. You should be able to update your copy to the latest version from your purchase site.

Get it from Smashwords, iTunes, B&N, or Kobo

Arlee Bird said…
Congratulations on this release. Hope all goes well with it.

Arlee Bird
Tossing It Out