Flash fiction has been a feature of Jemima Pett's blog for the past ten years.  We have now curated four collections, on different themes, and included some of the best-known characters among them. 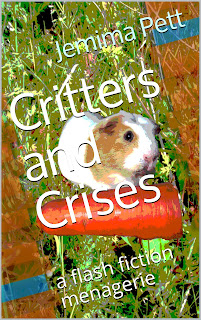 Critters and Crises is an animal themed collection.  Stories vary from the rat's tale of the Fire of London, to the viral epidemic first discovered at a garden fete.  Several guinea pig stories make their way into this one, including two Halloween favourites. And, star of the cover, is Kevin with his enormous carrot, which inspired the tale Daucus Gigantica, and heads the collection.

Publishing on 6th May: Greed and Retribution 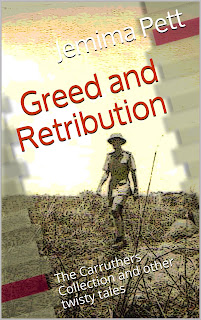 At last, we have collected the eerie tales of Carruthers and his contempories together, for a feast of adventurers coming to a bad end... or not. This collection also includes Jemima's popular view of Hell, in three stories, all with a nod to less than heroic real-world characters. The cover picture of Geoffrey Pett striding across the savannah is a good stand-in for Carruthers.  Geoffrey appeared as a side character in one adventure, but his name has been changed in this collection. 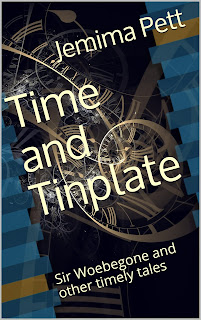 Time travel, whether by use of a magic sword or other means, features strongly in Jemima's short fiction. The collected Sir Woebegone stories add a touch of the weird to the tales on offer, but whether it is a person trying to right wrongs, prevent disasters, or aliens running on time at a completely different pace from us, it is a collection to delight everyone. 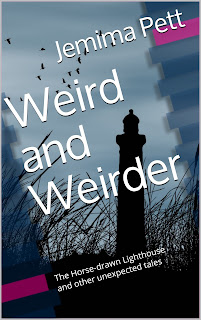 Jemima certainly produces some weird ideas, and this includes the group of transformations known as the Boxcar stories, as well as other stories involving change. For want of somewhere else to place them, the stories set on the Road to Erebor also appear here. They are all led off my one of Jemima's early favourites, The Horse-Drawn Lighthouse.

There will also be a paperback edition, format to be determined. It is likely to be available direct from here, rather than on the distribution network, to keep costs down. Fulfilment will be through Blurb.com. The paperback is not likely to be released before July.