The Messenger Misadventures is now listed for publication

The Messenger Misadventures is a collection of four stories for younger readers. It stars Dylan, the messenger for Castle Haunn, his brother Dougall, and their friend Deirdre.

Regular readers will recognise that several stories have appeared starring Dylan as the messenger of Castle Haunn, before he and Dougall set off on their adventure in The Princelings of the North (Princelings book 8).

The first story, written as a Christmas entertainment, is a new version of Dylan's Yuletide Journey. This appeared on the Princelings website in 2012. It was first published in the BookElves Anthology, and then had a life of its own on Smashwords, iTunes, B&N and Kobo until last year, when it was withdrawn.

Dougall's Reindeer Adventure appeared in the second BookElves Anthology, and has similarly had a revamp.

Dylan and the Lights of Ulva was written a couple of years ago as a fund-raiser for the real island of Ulva.

The fourth story in the collection is a new one, starring Deirdre, the daughter of the blacksmith.  Deirdre also has an active role in the rewritten Lights of Ulva, as well as accompanying Dougall on some of his trials. 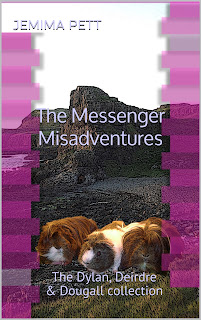 The Messenger Misadventures is now listed on Amazon for Kindle (pre-order), and Smashwords for everything else. It will also be available for pre-order at iTunes, Kobobooks and B&N for Nook.

Publication is due for Thursday April 8th 2021.