The Perihelix is ready for pre-orders

We are pleased to announce that The Perihelix is now listed on Amazon and on Smashwords, and also on Apple's iBookstore, B&N and Kobo.

Two asteroid miners, three women, one spacecraft, and a hunt for five pieces of a legendary weapon scattered around the galaxy.

Big Pete and the Swede bring their latest haul of orichalcum back to Viridium C for a long vacation, but they receive strange messages, and uncover a threat from two opposing powers manoeuvring to drag them back to their pasts - pasts they have tried very hard to erase. 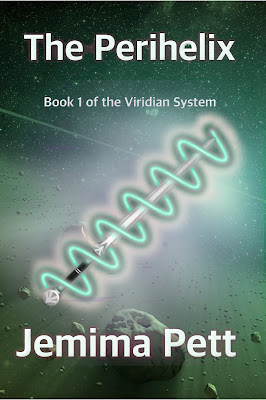 You can pre-order The Perihelix from Amazon for Kindle, Apple for iPad, B&N for Nook, and Kobobooks (for Kobo).

For a limited period only, The Perihelix is available at only 99c (99p in the UK).  We hope early purchasers will leave a review on their purchase site and/or at Goodreads.

Add it to your Goodreads booklist!

The Perihelix is also available from 16th February in all ebook formats from Smashwords.

Newsletter subscribers to the Viridian Series website should watch out for further special subscriber offers!

We will have news of the paperback books in early February.
Posted by Jemima Pett at 08:00

Most of the activity this year has been about tackling the Covid-19 restrictions, completing the Princelings of the East series and preparin...