The Viridian System is a science fiction series from Jemima Pett.

The concept emerged from some flash fiction stories on her blog - the first appearance of the heroes, asteroid miners Big Pete and the Swede, was in her 'Random Title' piece called The Orichalcum Library. 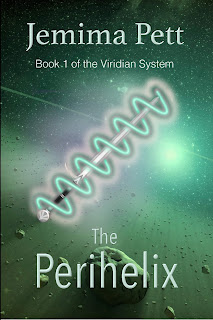 The first full length novel in the series is called The Perihelix, which was published on 16th February 2016, then withdrawn and completely revised, is available from Amazon now.

Pete Garcia and Lars Nilsson, or Big Pete and the Swede, are successful orichalcum miners, and therefore rich.  They still mine asteroids, though both hide secrets, even from each other - and they've been partners since they met at college. After starting a well-deserved vacation with their favourite girls in attendance to provide a few home comforts, first they win the local flyers' race through the canyons of Pleasant Valley, a double planet in the Viridian System, then they relax on Sunset Strip, the other habitable planet in the system, where they start getting strange messages.

The search to find the shards of the legendary Perihelix is forced upon them by the threatening Arko Fanwester, a Pavanian high up in the Federation, an avaricious organisation in opposition to the domineering Imperium. Just the sort of people that Pete and the Swede try to avoid.

Left on their own, the girls, Dolores, Maggie and Aramintha, learn to fly Pete's spacecraft, tracking the boys halfway round the sector before arriving back nearly where they started; the pieces of the Perihelix appear to be in two people's hands, and whoever can put them together will control a weapon of unimaginable power.

The Perihelix is suitable for readers age 16 and over.  Attitudes to sex are more European than American.  Two men who work for months without seeing anyone else have three women they pay for company during their vacations. Anything can happen, but it usually happens tastefully.  Swearing is usually from their advanced societies and not always traceable to Anglo-Saxon body part terminology.  Violence happens, but not gratuitously.  There is some innuendo and the boys are rarely serious for long.

Sign up for news, updates and offers for the Perihelix on the Viridian System series website viridianseries.uk 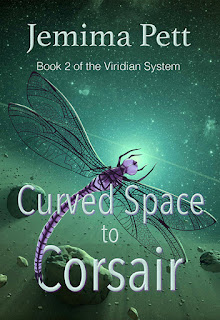 Book 2 in the series, Curved Space to Corsair, was published in January 2019.

Asteroid miners Big Pete and the Swede deserve a holiday with Maggie and Dolores, but the Delta Quadrant is hardly a vacation spot. Pete has kept secret the call to his home planet, Corsair, to rescue them from disaster. He uses the excuse of Dolores’ training to become a pilot to give give her more space hours, only to send them through a natural wormhole to an uncharted destination. Meanwhile the Imperium declares war on the Federation, while a little personal business by one of the senators leads him off in the direction of the Viridian System to start a canny land grab.

Curved Space to Corsair is the second in the Viridian series, a proposed trilogy. It follows on from the events in The Perihelix, and includes references to events in that book. It’s mean, lean, and occasionally sexy.

A short collection of teaser stories in ebook format is available from Smashwords, B&N, the Apple iBookstore and Kobo - Viridian System Sampler.

Jemima Pett said…
You can find the new edition of The Perihelix at your favourite online retailer :)
18 January 2019 at 14:02